OTTAWA — The Canadian for-hire trucking industry hauled 745.5 million tonnes of freight in 2014, an increase of 7.9% from 2013, according to Statistics Canada.

This growth is attributable to increased domestic and transborder shipments, as indicated by the Trucking Commodity Origin and Destination Survey, which collects information on Canada's for-hire trucking industry. The survey targets trucking companies with at least one establishment having an annual revenue of at least $1.3 million. It excludes foreign-based trucking establishments operating in Canada and private fleets.

Domestic shipments rose 8.3% to 642.2 million tonnes, representing 86.2% of the overall tonnage hauled by for-hire carriers in 2014. The most tonnage hauled originated from Ontario, Alberta and Quebec. Top commodities were general freight in Ontario and Quebec and crude petroleum in Alberta.

The volume of freight crossing the Canada/U.S. and U.S./Mexico borders increased 5.5% to 103.3 million tonnes in 2014. This increase is attributed to shipments of general freight and motor vehicle parts.

Overall, from 2009 to 2014, Canadian for-hire tonnage of freight increased 41.1% as both domestic and transborder shipments rose. During this timeframe, general freight, gravel and crushed stone, crude petroleum, gasoline, and lumber were always among the top seven commodities shipped by truck. 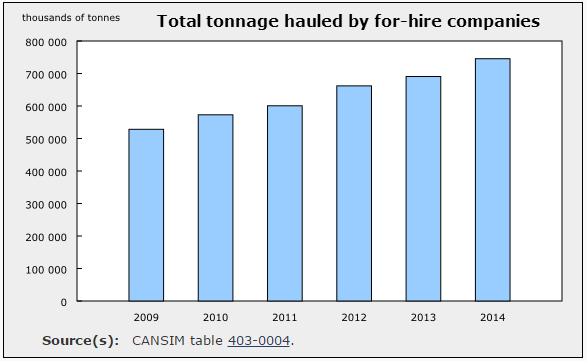 Between 2009 and 2014, an average 74.5% of tonnage shipped remained in the same province where it originated. Shipments to other provinces represented 11.7% of tonnage and the remaining 13.8% was carried across the U.S. border.

Over this same period, Ontario, Alberta and Quebec were the provinces of origin that recorded the largest increases by tonnage, with most commodity shipments remaining within the province of origin. Tonnage hauled rose by 49.1% in Ontario, 42.0% in Alberta and 32.4% in Quebec.

Over this period, not only was there a greater volume shipped but freight was shipped a greater distance, increasing 7.0% to 635 kilometres per shipment in 2014. The overall distance grew 35.6% as a result of increases in both domestic freight and transborder shipments.